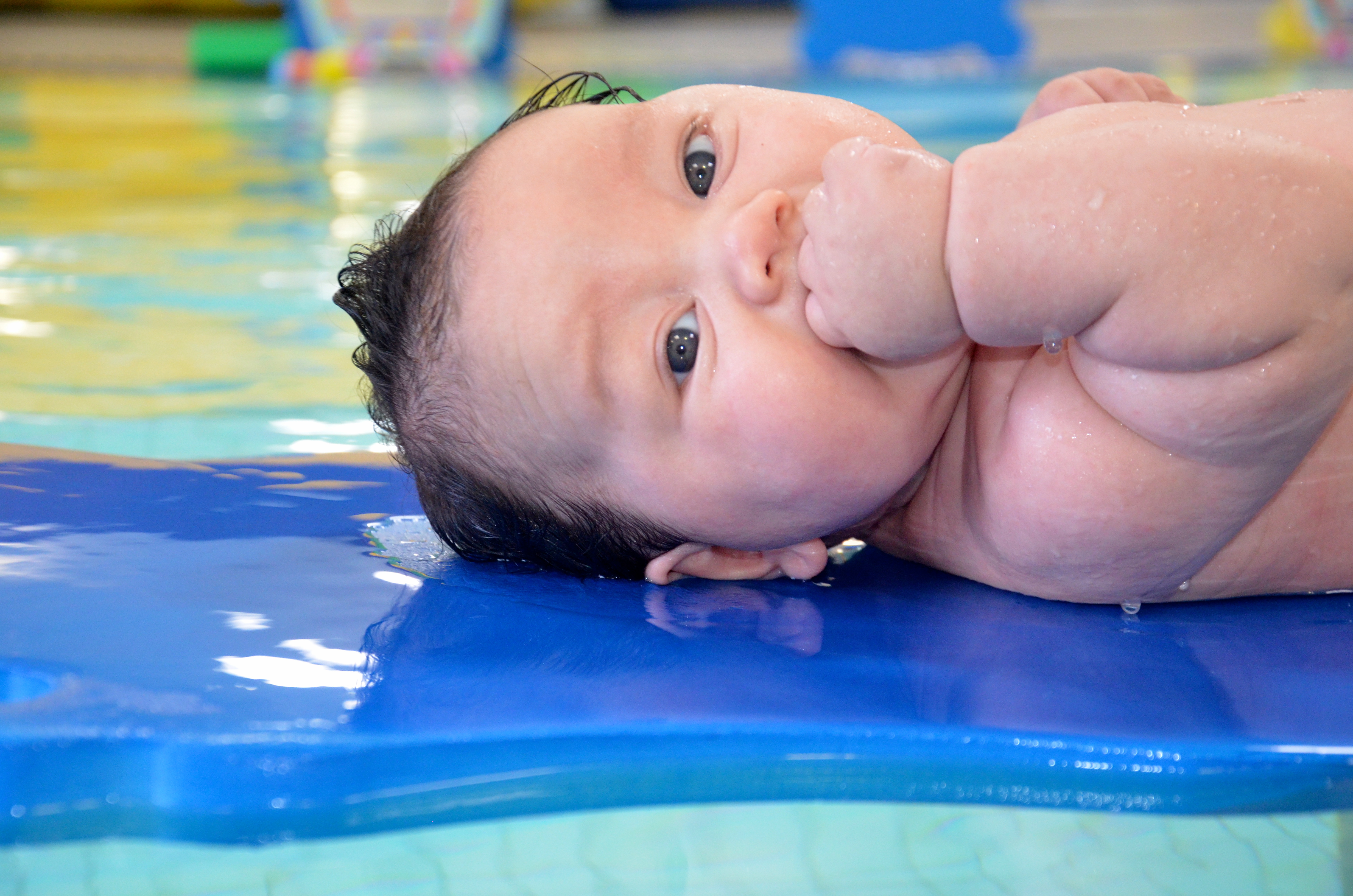 There have been a lot of studies done about the benefits of baby swimming, and parents asking, “how early can a baby learn to swim?” What we’ve learned from our research points to the fact that the earlier an infant begins swim classes, the better for their development in a number of ways.

But, specifically, you might be wondering how swim lessons make a difference in this formative time period. Here’s some more information, through the lens of child development stages.

During these earliest months of life, your baby will mostly spend their days eating and sleeping. But they also will begin to stretch, kick, grasp at your finger, and respond to loud noises.

If cleared by your pediatrician, as most infants are, your little one can usually start parent-and-baby swim classes at two months of age. These early lessons are centered primarily around parent/child bonding, establishing comfort in the water and eventually learning foundational skills like blowing bubbles. This will help start preparing and conditioning their bodies and lungs for exercise and further development.

During this season of your baby’s development, you might notice them interacting more with other people and being more purposeful in their movements. They’re typically starting to try rolling over, sitting up, and even scooting at this point.

Studies have found that early swimmers tend to have more advanced large and fine motor skills than other children of the same age, particularly with balance, self-propelled movement, and an improved grasp. So don’t be surprised if your tiny swimmer is ahead of their peers in these areas.

Little ones are growing, physically and cognitively, by leaps and bounds during this stretch of time. You can expect to see them crawling, standing, and possibly even starting to walk. Being active and engaging with other people also becomes really important to infants as they near one year of age.

These developmental milestones are further bolstered by the skills being gained in swim class. In fact, a Griffith University study found that children in swim lessons from an early age are, on average, seven months ahead on motor skill developmental milestones than the normal population. Swimming kids have also been found to be more socially adept, most likely as a result of spending time with their peers and other adults in the interactive and positive atmosphere of swim class.

In the throes of toddlerhood is often when children become especially eager to communicate - and get their way. You might be amazed at all the physical skills your little one can do at this stage, both in and out of the pool. You may also see a marked improvement in how well your child can follow directions. One study found that, on average, young swimmers were twenty months ahead of their non-swimming peers in the ability to understand and follow instructions. This skill comes in handy at swim class, preschool, home and, well, everywhere!

These are some of the specific ways that swim classes can accelerate and strengthen your child’s healthy development as they grow, and this just scratches the surface. Contact us if you’d like to learn more about our baby swim school  and programs today!